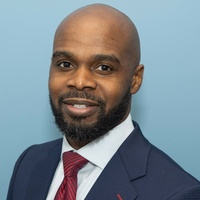 Steve Janvier learned the key principles of asset management before he was even ten years old. He just didn't realize that he was the asset.

Growing up in Brooklyn, his West Indian immigrant parents worked two jobs each, saving their money to invest in private schools for Steve and his sisters, protecting them from their ominous surroundings.

By the time the family moved to Long Island, the seeds of responsibility and integrity were well sown. "My Dad was a great role model," Steve explains. "He worked long hours to take care of his family, and he knew: having a dream isn't enough. You have to be willing to work.”
Many of Steve's best life lessons are direct hand-me-downs from his dad. "He wouldn't just ask me once, 'What do you want to be when you grow up?' He would ask it over and over, wanting me to really think about it. One of his expressions was 'Good decisions come from thinking things through rationally.'"

It's a lesson Steve took to heart. Thinking things through rationally, he knew that he enjoyed problem solving, was good at research, and, most importantly, genuinely loved interacting with people. Getting into financial services directly out of college, he immediately distinguished himself as Rookie Of the Year.

A mere four years later he made Vice-President & Sales Manager, and just three years after that was made Agency Sales Director, moving from the client-centric work in the field and using his experience to recruit, retain, and mentor a new team. "Steve is responsible for my success," says one of those mentees, now an Agency Sales Director himself. "Struggling to succeed, Steve saw something in me, and believed in me. He hung in with me until my business turned around. That's who he is.”
Despite his successes in management, Steve found himself missing the time with his clients. When he made the decision to return to the field, he knew immediately he'd made the right choice. He quickly earned a place at the Million Dollar Round Table in 2004, the premier trade organization for financial professionals recognizing "exceptional professional knowledge, ethical conduct, and outstanding client service." He earned his CERTIFIED FINANCIAL PLANNER™ (CFP) certificate and earned his Chartered Advisor for Senior Living (CASL) designation to help him better serve his clients of 55 years or older as they look to prepare themselves financially for a long, active, and potentially fruitful retirement.

Steve graduated from Towson University with a Bachelor of Science in Business Administration and a concentration in Finance. He resides in Howard County with his wife and three daughters. Steve believes in giving back to his community, he particularly enjoys volunteering at The Believe in Tomorrow’s Children’s Foundation at John’s Hopkins Hospital supporting critically ill children and their parents.